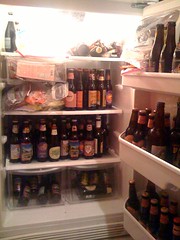 I cannot deny it – I love beer. My “gateway beer” that taught me there was a whole universe outside of mass-produced beer was Pete’s Wicked Ale, introduced to me when I arrived in the Bay Area to attend Stanford in 1989. Then, during my junior year, I spent six months in 1992 living in Germany, three months at Stanford’s campus in Berlin and three month in Munich working for BMW on the assembly line building their 3-series cars.

Aside from memorizing Berlin’s U-Bahn system and learning German words (such as Warmelosierung and Gewindebolzen) for car parts whose names I didn’t know in English, I developed a love for excellent beer (i.e. not American macro-brewed Budweiser, Miller and Coors) and eventually started brewing my own beer. After moving to the lower Haight in San Francisco in 1996, I found myself within blocks of über beer-nerd bar Toronado, and continued my beer education in those hallowed halls.

My first post-Excite-IPO angel investment was in a brewery based in San Francisco called Speakeasy Ales & Lagers. Today Speakeasy is thriving and brews and bottles some truly excellent (and award-winning) beers, my favorite being Big Daddy IPA. Their bottled beers enjoy good distribution on the West Coast, particularly in San Francisco, are served on tap in bars throughout the Bay Area, and I’ve even seen them on the shelves of Dean & Deluca in New York, Napa and Georgetown.

My love for Speakeasy’s Big Daddy IPA turned me on to India Pale Ales in general, and I’ve been thoroughly exploring the genre over the years. IPAs are strongly-hopped beers with higher-than-average alcohol content that were originally brewed for the long sea voyage from the UK to India back in colonial days. Because the voyage was long, the beer had to be brewed to keep during the journey. Hops act as a preservative and impart both a distinctive aroma and a strong flavor to beer that some would call bitter, but I would call complex.

Aside from Big Daddy, some of my favorites include Lagunitas IPA, Stone IPA, Boulder’s Avery IPA and the 60-, 90– and 120-minute Dogfish Head IPAs. I discovered Dogfish Head thanks to the excellent and extensive beer list at The Kitchen Upstairs here in Boulder. The Dogfish Head IPAs are by far my favorites, and I was pleased to discover an excellent in-depth article in the New Yorker on Delaware’s Dogfish Head Brewery, which is well worth a read if you are interested in beer. My brother-in-law is also a beer fanatic (the picture above is of his beer fridge), and he and I are plotting a pilgrimage to Rehoboth Beach to visit the source at some point.

I’ve been known to take beer-focused trips in the past, so a trip to Delaware would not be the first. This past May, my partner Jason and our friend Martin and I took a three day “man trip” to Belgium to visit Antwerp, Brugge and Brussels and sample as many Belgian beers as we could. Between the three of us, I think we had about 90 beers, a respectable sample of what’s on offer in a country that boasts domestic production of at least 500 varieties of standard, regularly brewed beers and perhaps thousands when you count specialty one-of-a-kind brews that are put out regularly by Belgium’s breweries and monasteries.

Now that I’ve gone through this recap of my beer education and obsession, I’m hoping my readers will suggest other ways I might expand my beer universe…