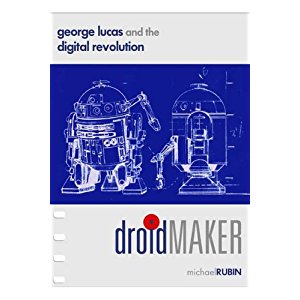 A few weeks ago, during my family’s Spring Break vacation, I had the pleasure of reading a great history of George Lucas and the massive impact he and the extended Lucasfilm family had on the technology behind filmmaking, and, ultimately on the broader technology ecosystem. This book is exhaustively researched and is almost textbook-like in its presentation of annotated photos and topic-specific sidebars. Unlike a text-book, however, it is a real page-turner. I devoured Droidmaker in a few days sitting poolside in Hawaii, Mai Tais firmly in hand.

What was most enjoyable about this book is it is not simply a George Lucas biography – while Lucas is (obviously) the main figure in the book, author Michael Rubin (full disclosure: he’s an old buddy of mine) does an excellent job placing Lucas and his mentor-colleague Francis Ford Coppala in the context of filmmaking history. Rubin deftly illuminates how their collaboration and competition served to move the filmmaking techniques and technology forward, way up in Northern California, far removed the ossified and technophobic power center of Hollywood. Rubin worked at Lucasfilm early in his career and enjoyed personal access to many of the seminal figures in this book, including Pixar founders Ed Catmull and Alvy Ray Smith as well as George Lucas himself.

There’s plenty of nerd-fodder in here too. Rubin is comfortable discussing the technological intricacies behind video vs. film, frame buffers, computer generated animation, stop-motion photography, 3D rendering and more. I happily geeked out on the discussions of frame rates of film vs. video and 3:2 pulldown techniques used to transfer film to video. The masterstroke in this vein is the discussion of how the guys in the computer division (which later became spun out as Pixar, when Steve Jobs bought the team and technology from Lucas) simultaneously solved the thorny problems of eliminating image jaggies and creating motion-blur in computer-generated graphics. In a single moment of insight (after working for years on both problems), they realized that temporal and spatial randomized sampling while rendering each frame of a computer animation were the key to making the final product look realistic. Or, more specifically, film-like.

The discussion of the technology are informative and approachable even for the non-technical reader (though I admit to having some exposure to the intricacies of digital media editing as a life-long musician and occasional digital audio engineer). These tech discussions reminded me of another great tech history book I read and reviewed recently: Racing the Beam, which is the history of the Atari 2600 game console.

Droidmaker is a great read and really made me appreciate the immense contribution Lucas made to filmmaking but also to digital media technology in general: his personal investment (to the tune of tens of millions of dollars) in fundamental R&D in computer animation and digital audio and video editing in the late ’70s and well through the 80’s led not only to seminal companies that were birthed at Lucasfilm, like Pixar and THX, but also deeply influenced the broader path of technology evolution that led to the emergence of independent companies like Avid (digital video editing) and Digidesign (digital audio recording and editing with the ProTools platform).

So go pick up a copy already!