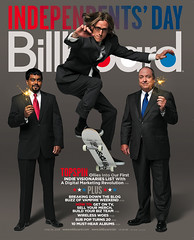 I’ve recently joined the board of an incredibly cool company called Topspin Media, via Foundry Group’s Series B investment in the company. This is an investment literally a decade in the making.

I met Topspin’s co-founder, seed investor and Chairman Peter Gotcher about ten years ago while he was a venture partner at Redpoint, via an introduction from his partner Geoff Yang, who was a board member and Series A investor in Excite, where I was one of the co-founders. As a guitarist and avid music nerd, I practically demanded that Geoff introduce me to Peter, knowing that Peter was the founder of Digidesign, maker of the industry standard digital audio recording platform ProTools. I had always fantasized about owning a ProTools rig, and once I had the means (thanks Excite IPO!), I outfitted myself with a system, which infected me with the ongoing and never-ending malady of recording studio gear lust.

Peter and I became friends and he even invited me down to LA for a product brainstorming session with the guys at Line 6, another very cool music technology company that Peter helped get started that, among other things, pioneered digital modeling of analog gear and became one of the largest manufacturers of guitar amplifiers around.

I met Topspin’s other co-founder and Chief Product Officer Shamal Ranasinghe in 1998 when he came to California to get his MBA at Stanford’s Graduate School of Business, where he was classmate of my wife Katherine. Shamal and I became fast friends and I was particularly struck by his passionate commitment to change the music world through technology. I introduced Shamal to Peter, which ultimately led to their decision to co-found Topspin several years ago. Shamal stayed true to his singular passion to work in the world of music technology, and spent time defining the product vision for RealNetworks, MusicMatch and ultimately at Yahoo! Music, via Yahoo’s purchase of MusicMatch.

While I was out on the road with Brad helping to raise the first Foundry Group fund last year, Topspin was very busy – they raised their Series A from Tim Haley at Redpoint Ventures, built their initial product offerings and scored a major coup by landing Yahoo! Music GM Ian Rogers as CEO, who has just about the ideal background for someone you’d want in the helm at Topspin. He’s been a software engineer, entrepreneur and record label executive and his career has included stints at Nullsoft, Grand Royal and Media Code. Ian also happens to be one hell of a nice guy and perhaps the most cogent thinker I’ve encountered when it comes to the issues facing the music industry today.

So last month, when Shamal and Peter called me and said they were thinking of starting their fundraising process for their Series B, my partner and band-mate Jason and I hopped on a plane to meet Ian and to get an update on Topspin’s progress since we had last spent time with them in the summer of 2007. We were blown away with the progress they had made with the product, and more importantly, with the breadth of their future vision and their understanding of the trends at play in the shifting sands of the music industry.

When we returned to Boulder, we shared our enthusiasm for Topspin with our partners and invited the Topspin team out to Boulder to spend a day with us. The day went incredibly well, we broke bread together at Frasca (my favorite restaurant in Boulder), and by the end of the day, we had agreed upon a deal. Just three weeks later, we closed our investment in Topspin. I’m honored and excited to be part of the Topspin team.